The following sections explain why the Lee Point is a special part of Darwin.

Darwin’s environment and Aboriginal culture creates a capital city like nowhere else and a place where people can connect with nature.

Darwin could be called the “City of Birds” because of special places like Lee Point. Lee Point is located on a peninsula, bounded by the Arafura Sea to the west and north, Buffalo Creek to the east and Darwin northern suburbs to the south (see map below).

Lee Point contains over half of the Casuarina Coastal Reserve (CCR). CCR is the Territory’s most visited reserve. Lee Point/CCR is enjoyed by families, nature lovers, mountain bike riders, birdwatchers, fishers, and bushwalkers and offers unique recreation and tourism opportunities. Over half the people in the Territory live less than 30 minutes from Lee Point by car. 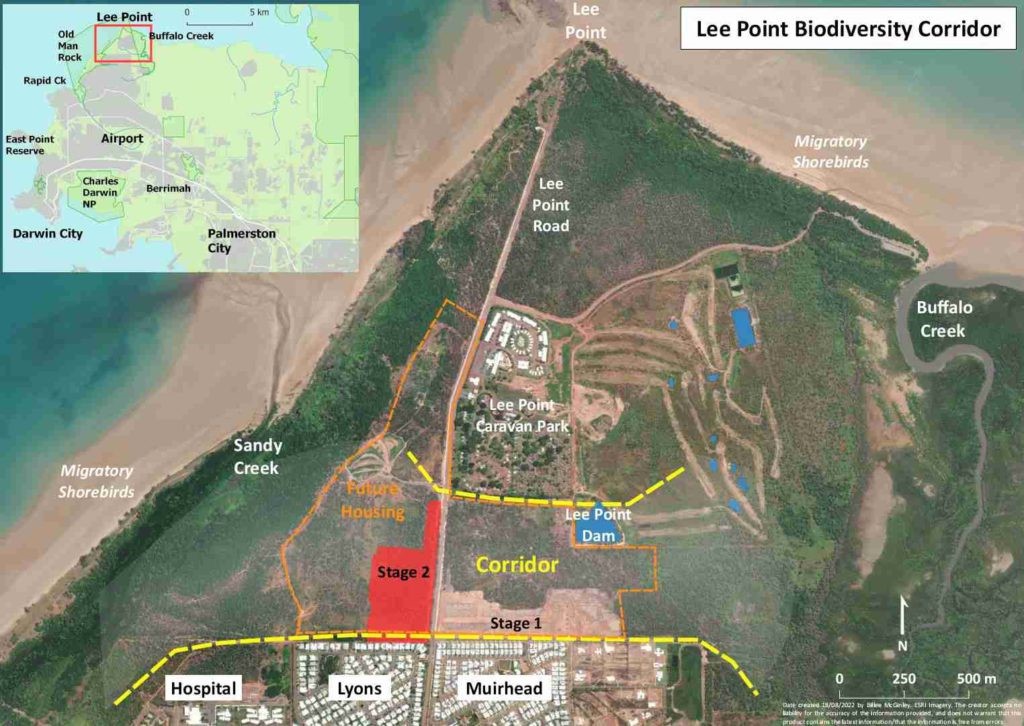 No other park in the Top End apart from Kakadu National Park has the range of habitats that Lee Point offers. Its habitats include; coastal areas (with internationally significant shorebird sites), marine, mangrove, vine forest, woodland, grassland, freshwater and rainforest. This rich variety of habitats continues to attract wildlife and people to Lee Point. Approximately 240 bird species or 80% of the bird species in Kakadu National Park (which is 4000 times larger) have been recorded at Lee Point. Some its rich biodiversity is shown in the Lee Point Biodiversity Corridor photos (not linked yet).

However, this is changing. The following sections describe Darwin woodland areas, threats from future land use and possible opportunities for Darwin.

Future development will clear most of the woodland from Darwin.

In Darwin, tropical savanna woodland (hereafter called woodland) occurs in the same area that is used for housing – typically 14m above mean sea level. Woodland areas (like housing) were substantially damaged by Cyclone Tracy in 1974 (48 years ago), however, the level of damage varied depending on location.

The below maps show expected changes from 2021 (Fig 3a) to 2050 (Fig 3b). It assumes clearing in all areas 14m above mean sea level that are not in reserves or buffers, except the Lee Point corridor (see Fig 1).

Green represents the undisturbed areas and grey the disturbed areas. The dashed blue circles in Fig 3a are where wildlife corridors are being disrupted and the black dots in Fig 3b indicate the size and location of the main remaining woodland areas.

By 2050, most of the woodland in Darwin will have been cleared. Expected changes are:

*Planning for a Darwin northern wildlife corridor should happen now.

The information above is based on: Darwins large woodland trees-a preliminary study

Lee Point has always been a culturally important place for the Larrakia people.

Land and sea are an integral part of Aboriginal culture. Located in the sea off Lee Point is Nungalinya (Old Man Rock). Nungalinya is part of the creation story for the Larrakia people. Lee Point has always been a good place for Aboriginal people to meet and get food. Senior Elder – Bill Risk talks about why Lee Point needs to be protected for future generations.

The main reasons visitors come to Darwin is to see the top end environment and experience one of the oldest living cultures in the world. 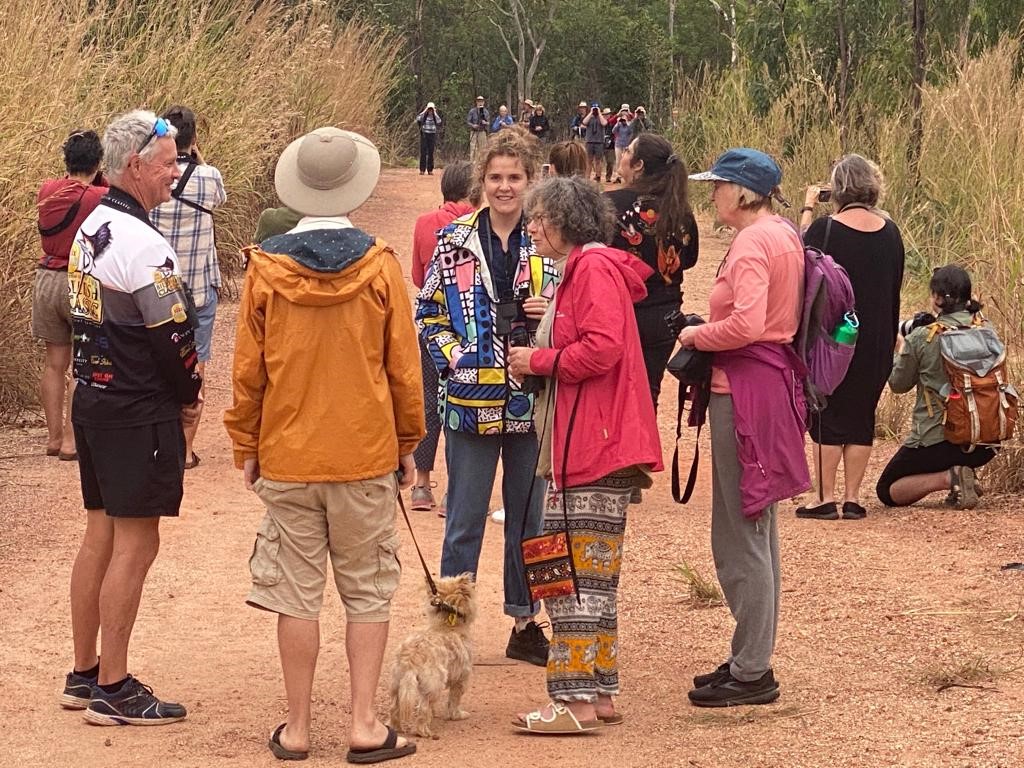 The potential for Lee Point ecotourism has yet to be properly explored. However, activities involving Larrakia and natural environment would be attractive to visiting cruise ship passengers that do not have enough time (or wish to make the 3-hour road trip) to see Kakadu National Park. Lee Point is approx. 23 minutes from the Darwin Cruise Ship Terminal.

Over half of the Casuarina Coastal Reserve (CCR) is in Lee Point. Based on NT Government Parks data , CCR recorded 1.45M visits in 2021 making it the most visited reserve/park in the Territory and CCR visitor numbers have been growing at 8% per year (from 2017).

At this stage, only 50% of Lee Point land (total approximately 5 sq km) is available for tourism. However, up to 90% could be used if defence land and other land was incorporated into a public reserve. 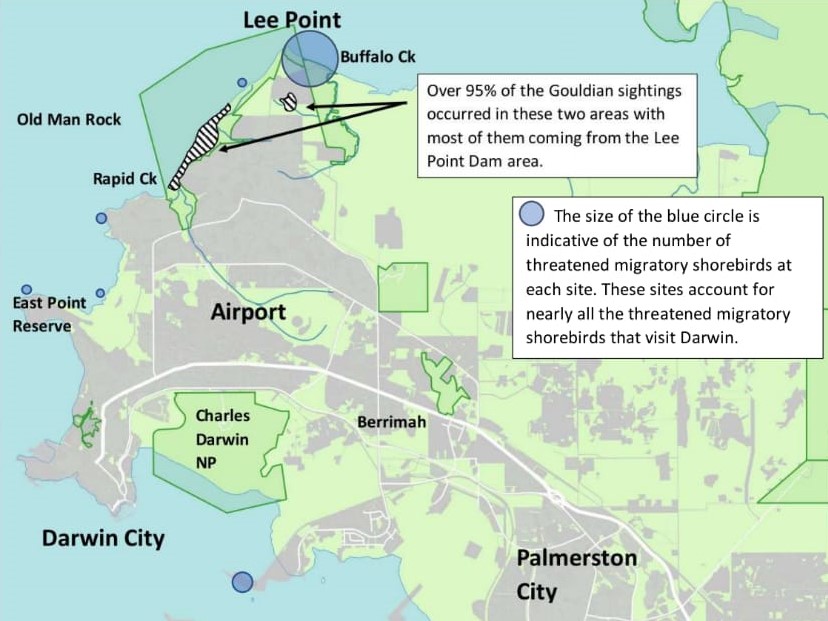 The Gouldian finch is one of the most beautiful birds in the world. They live on a diet of grass seeds and use woodland tree hollows in April-July for breeding.

From April to October 2022; there were over 340 sightings of Gouldian Finches in Darwin (based on eBird). Most of the sightings came from the Lee Point Dam area (see above map) and it was highly likely they were breeding in this area.

Many people came specially to Darwin in 2022 to see these beautiful birds in the wild, for updates on sightings, refer Gouldian Finch Irruption .

Migratory shorebirds and turtles travel vast distances in their lifetime and often return to the same place to breed or for food. These places become critical for their survival.

The Lee Point coastline (see map above) supports internationally significant numbers of migratory shorebirds and most of the threatened shorebirds in Darwin. It also includes some of the best expanses of sea grass in Darwin Harbour that get used as feeding meadows by dugongs .

There is already a high rate of disturbances to migratory shorebirds on the Lee Point coastline. The planned DHA housing development (800 houses) locates housing much closer than ever before to the sites, and this is expected to further increase disturbances to the shorebird and turtle sites.

The (endangered) Bar-tailed Godwits in the foreground are able to fly non-stop (from Siberia) further than most commercial jet airliners. People find such animal migrations amazing. Being able to view migratory shorebirds or watch baby turtles being released (certain times of the year) is a special experience.

The nocturnal Black-footed tree-rat is an attractive rodent endemic to northern Australia and one of the largest in Australia. They prefer to shelter in large tree hollows during the day and mainly eat hard fruit and seeds from woodland.

The large woodland trees the Black-footed tree-rats shelter in can be seen at the Lee Point corridor.

Darwin cycads are endemic to the top end and a special feature of Darwin. Globally cycads are one of the oldest and most endangered plant groups on Earth with many cycad species struggling for survival. 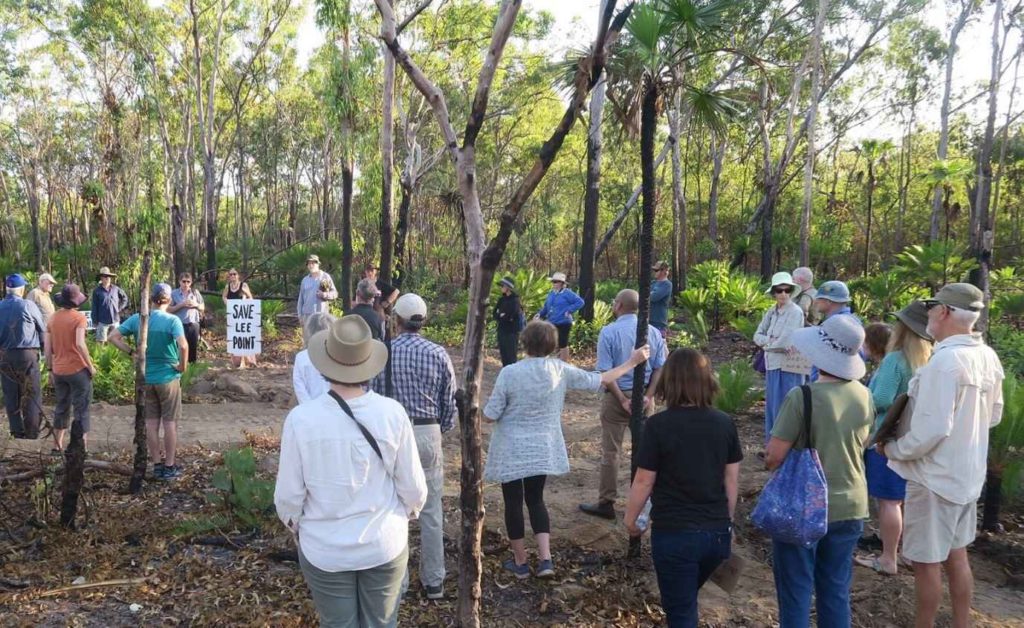 Fig 10. People protesting on site at Stage 1 – all the Darwin cycads growing here were cleared.

Cycads are still common in the Darwin area. However, only a small proportion of the Darwin cycad population is protected in reserves, and this makes them vulnerable. Stage 1 (see above) had the best stand of cycads in Lee Point/CCR and possibly in Darwin – approx. 600 cycads were cleared from Lee Point in 2021.

Fortunately, cycads can be easily accessed and seen in intact woodland areas that exist in places like Lee Point. For visitors, seeing these attractive ancient plants in the wild helps make Darwin a special place.

Darwin’s environment and Aboriginal culture creates a capital city like nowhere else. A place where people can connect with nature.

Lee Point is a special part of Darwin because it: